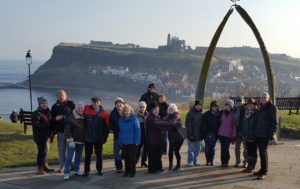 The annual run to Whitby was well attended this year. A few hardy (and cheapskate – no parking fees on the west cliff) souls parked up at the top, others took another route down to the parking on the riverside (see Oily Hands excellent video).

The “plan” was to meet up in the Dolphin pub for a warming hot chocolate, but to our dismay this was ki-boshed when we were told the pub was not open! So groups mingled and dispersed. Some of us made our way to the Dolphin to find that it would open at noon, we formed an orderly queue outside and eventually after gnawing at the door the staff took pity on us and the flood gates were opened.

Gassing about cars and holidays ensued, I was glad to hear Owen revisited his round Britain tour in the BGT. People began to feel the hunger pains for the world famous Whitby cod and chips so we donned our warm coats and set out for chippies. We did not stroll far. Hadleys a mere hop and skip away.

Couldn’t do a lot of running after that so mooched around until the bitterness of the wind got to me and we popped back to the car to come home.

A good outing never-the-less. Always is to see good friends after the festivities.

There are no upcoming events at this time.